The so-called Islamic State has allegedly put out a “death list” with names of civilians that work with the local councils and administrations in northeast Syria backed by the Syrian Democratic Forces (SDF).

The pamphlet calls on civilians that work with “infidels” and the local councils or administrations “to repent or face the consequences.”

The document was published on Sept. 3 on behalf of the Islamic State security department of Wilayat al-Khayr, the former Syria-Iraq border province of the so-called Islamic State caliphate that was primarily made up of the city of Deir al-Zor and its countryside.

In the document, the terror group warns civilians that they could be kidnapped from their homes, public shops, or places of worship. It also threatened to blow up their homes.

“The one who repents, we will deal with them fairly,” the document said. It also reminded civilians of the underground Islamic State presence in the area. “We see you, and you don’t see us.” 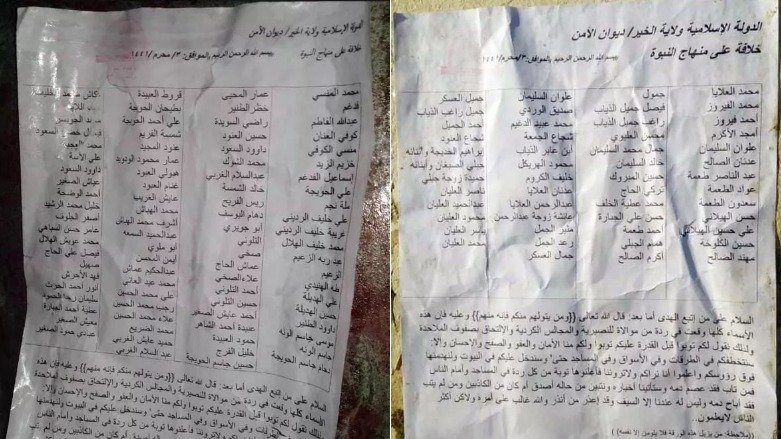 “Civilians are subjected to constant blackmail and persecution from [ISIS] on a daily basis,” he told Kurdistan 24. “Assassinations continue in the area.”

In some cases, Islamic State “members have been arrested and later released, and that’s why many civilians are so afraid of [ISIS] there,” he added.

Despite the SDF and the US-led coalition announcing the defeat of the so-called Islamic State caliphate on March 23, the terror group’s sleeper cell attacks persist in areas the SDF liberated.

In early September, the former Governor of Wilayat al-Khayr, Mikhlif al-Rafdan, and his son Yasser al-Rafdan were arrested by SDF forces in Al-Kasra town in the western countryside of Deir al-Zor.

According to the US army, the Islamic State has activated insurgency cells in areas the SDF controlled and “used these cells to conduct attacks in northeastern Syria,” a recent Pentagon Watchdog report said.

According to Nicholas A. Heras, a Middle East security analyst at the Center for a New American Security, the Islamic State has a well-developed surveillance apparatus in Deir al-Zor, “which is intended to identify and provide intelligence on locals who work with the SDF and the Coalition.”

“Once identified, these local officials are at real risk of being targeted and killed in attacks launched by ISIS operatives,” Heras told Kurdistan 24.

“ISIS has a clear doctrine to wage a war of attrition against the SDF, to prevent it from building a credible administration in the wake of ISIS.”

According to a Syrian source working in US-backed stabilization programs in Deir al-Zor, building a governance structure is not an easy task.

“Security is key here: all those engaged with governance structures are subjected to direct death threats,” the source said on condition of anonymity.

“We record two to three cases of attacks against civilian employees of councils, municipalities on a weekly basis. Especially in the lower Middle Euphrates River Valley.”

Thomas McClure, a Syria-based researcher at the Rojava Information Center, told Kurdistan 24 the goal of these actions is to intimidate “Arab communities from engaging with either the majority-Arab SDF which led the fight against ISIS or the multi-cultural, secular Autonomous Administration.”

Previous Hamas leader envisions the final victory with Iran over Israel
Next Thailand authorities worried that mass tourism is bringing security troubles
Terror Leaks[+]
Terrorist Attacks [+]
Terrorism Financiers [+]
WordPress Image Carousel Plugin
Regardless how powerful or unstoppable you think you are, we will find you, we will expose you and we will STOP you
Last Updates From