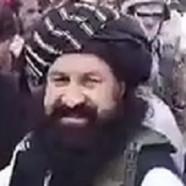 Roll: Involved in financing the terror organizations and planning operations for attacks that killed hundreds of people. Also, dealing with the connections with Al Qaeda

Activities:
Rewards for Justice is offering a reward of up to $5 million for information on Khalil al-Rahman Haqqani, also known as Khalil Haqqani or Khalil Ahmad Haqqani. Khalil serves as a key leader of the Haqqani Network (HQN), a U.S.-designated Foreign Terrorist Organization (FTO).

Khalil engages in fundraising activities on behalf of the Taliban and provides support to the Taliban operating in Afghanistan. As of early 2010, he provided funds to Taliban cells in Logar Province, Afghanistan. In 2009, Khalil was one of several people responsible for the detention of individuals captured by the Taliban and the HQN. Khalil has conducted operations for the Taliban on orders from his nephew, Sirajuddin Haqqani, the overall HQN leader and deputy leader of the Taliban. Khalil has also acted on behalf of al-Qa’ida (AQ) and has been linked to AQ terrorist operations. In 2002, he deployed fighters to reinforce AQ elements in Paktia Province, Afghanistan.

On February 9, 2011, the U.S. Department of the Treasury designated Khalil Haqqani as a Specially Designated Global Terrorist pursuant to Executive Order 13224, as amended. As a result of this designation, among other consequences, all property and interests in property of Khalil Haqqani that are subject to U.S. jurisdiction are blocked, and U.S. persons are generally prohibited from engaging in any transactions with Khalil Haqqani. In addition, it is a crime to knowingly provide, or attempt or conspire to provide, material support or resources to the FTO HQN.

Extremists, Who is Who in the Zoo
Haqqani Network