London Bridge terrorist Usman Khan was pictured with hate preacher Anjem Choudary as they spoke at a conference on Sharia law.

Khan, 28, was armed with two kitchen knives and wearing a fake suicide vest when he killed two Cambridge graduates – Saskia Jones, 23, and Jack Merritt, 25 – before being shot dead by police on Friday afternoon.

Photos of Khan and Choudary emerged today amid the uproar over the London Bridge knifeman’s early release from prison on terrorism offences.

An image showing Khan laughing in a brochure from Learning Together, the prisoner rehabilitation group that he attacked, has also surfaced.

The extremist wrote a poem and letter of thanks to the group – which described him as a success story – when it gave him a laptop he could use without breaching his licence.

British-born Khan, the son of Pakistani immigrants from Kashmir, is said to have walked around school with a photo of Osama bin Laden attached to the front of an exercise book.

He was also spotted laughing at videos of the 9/11 terror attacks in the US with other religious fanatics in a cafe when he was just 14, it was reported.

It was around that time that the jihadist – who was on licence and wearing an electronic monitoring tag when he carried out last week’s attack – started preaching Islamic extremism on the streets of Stoke on behalf of Choudary’s banned terror group al-Muhajiroun.

Before his first arrest nine years ago, Khan was a student and friend of Choudary, of east London, who was recently freed from prison on licence after serving five years for encouraging Muslims to join ISIS.

Now 52, Choudary was associated with one of the three terrorists who killed eight people in an attack on London Bridge and Borough Market in 2017, as well as one of the men who killed soldier Lee Rigby in 2013.

He has also been linked to foiled terror plots in the UK, young people who joined ISIS in Syria and the alleged inspiration of violence across Europe.

Khan and Choudary were pictured together at a Sharia law event at Cobridge Community Centre in Stoke-on-Trent, Staffordshire, on March 15, 2009. 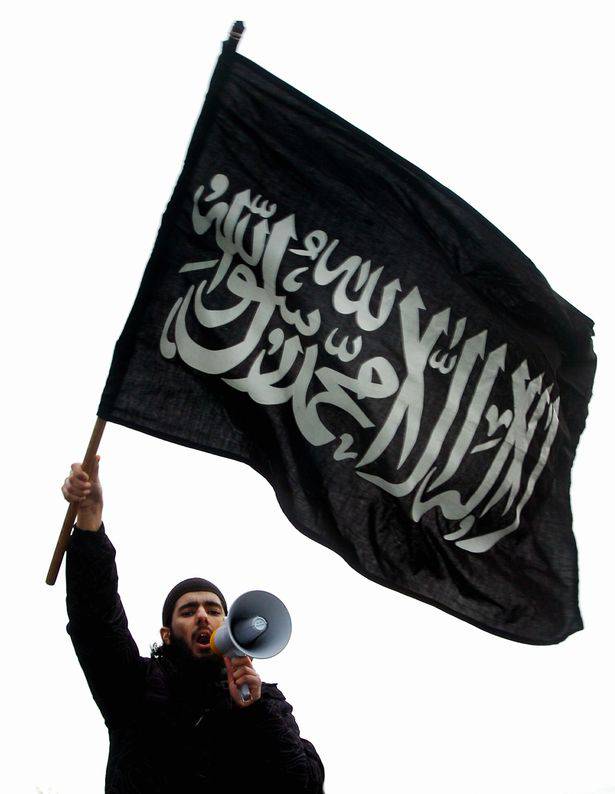 In December 2010, Khan and eight other men were arrested and charged with terror offences over a plot to bomb sites such as the London Stock Exchange and assassinate religious and political figures, including then-London mayor Boris Johnson.

Before that arrest, Khan actively took part in demonstrations between 2008 and 2010.

He was pictured waving an al-Qaida flag and ranting into a megaphone, and handing out leaflets titled “What’s your purpose in life?” and “Justice under Islam”.

The former Haywood High School student held a placard reading “Islam will dominate the world” at one demonstration.

In July 2008, Khan, then 17, spoke to reporters at a press conference after 50 police officers raided homes in the Stoke area in an operation under the Terrorism Act.

One of the homes was Khan’s older sister’s house in Cobridge, where he often stayed. Some of his belongings were taken.

No-one was arrested in the raids, which Staffordshire Police divisional commander Jane Sawyers said had stemmed from residents’ concerns and officers’ intelligence gathering.

Khan, who also had two older brothers, said at the time: “I was completely shocked. I am not a terrorist. All I have been doing is practising my religion. That isn’t a crime.

“The police were welcome to come and speak to us at our stall, or come and look in my house.

“I would have invited them in for a chat and a cup of tea.

“But they came to my house at 7am, and knocked my door off its hinges. I think that’s disgusting.”

“I was totally shocked and still am. I didn’t believe it at first when I got the phone call.

“I’ve done nothing wrong and want to know why the police have targeted me, but I can’t get any answers from them.

“Everyone who knows me is shocked because they know I am not the sort of person I am being made out to be. I am born and bred in this country, and I don’t agree with the killing of innocent people.”

Meanwhile, a photo emerged showing Khan laughing in a brochure from Learning Together, a Cambridge University prisoner rehabilitation programme that assisted him while he was in prison and after his release.

Khan was invited to speak at the group’s conference at Fishmongers’ Hall, on the north side of London Bridge, where he launched his deadly attack.

Mr Merritt was a course counsellor with Learning Together and Miss Jones was a former student supporting the event.

Learning Together had provided Khan with a laptop that he could use without breaching his licence, the Telegraph reported.

In his thank-you letter to staff he claimed that the Learning Together programme had a “special place in [his] heart”.

Khan’s apparent rehabilitation was used as a case study promoting the work of Learning Together.

A report by staff at Whitmoor prison said: “We have equipped Usman with a [laptop] so that he can continue his studies and his writing, which he started in Whitemoor.”

Khan, who lived in Stafford and was taking part in a government deradicalisation programme, was given special dispensation to travel to London for Friday’s conference, but he did not have an escort, it was reported. 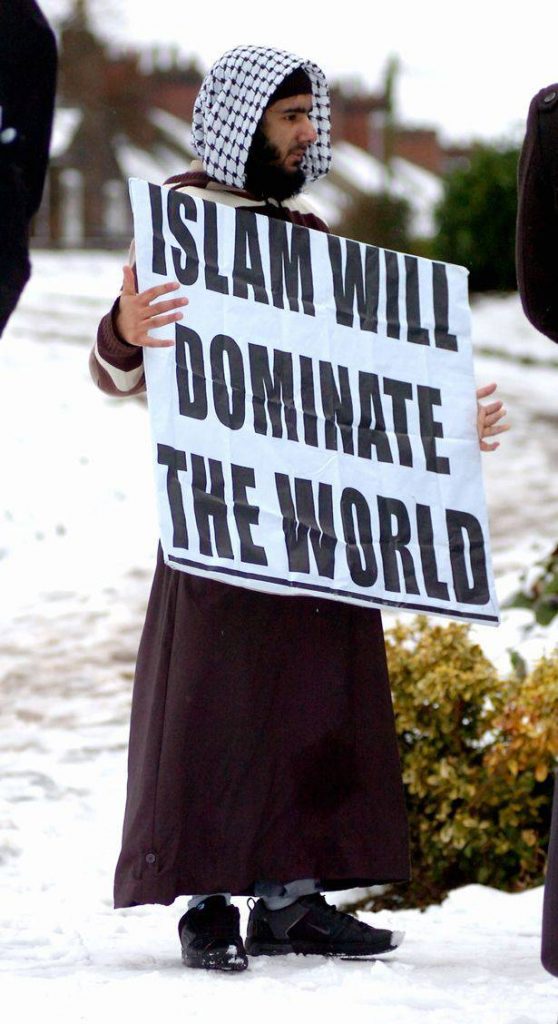 It is understood Mr Merritt worked with Khan while he was in prison.

Vigils were held at 11am on Monday in London and Cambridge to pay tribute to the victims of the attack and honour the emergency services and members of the public who bravely responded to the incident.

Mr Merritt’s girlfriend, Leanne O’Brien, broke down in tears and clutched a cuddly toy as she was supported by family and friends at the event in Cambridge.

Monday’s remembrance services came as West Midlands Police said a 34-year-old man arrested in Stoke-on-Trent on suspicion of preparation of terrorist acts had been recalled to prison due to a suspected breach of his licence conditions.

He has been named in reports as Nazam Hussain, who was jailed with Usman in 2012 for terrorism offences.

Like Usman, he had been released early on licence after successfully appealing against his original indeterminate sentence.

Officers from the West Midlands Counter Terrorism Unit held him after a search of his home on Saturday.

The force has said there is no information to suggest he was involved in Khan’s attack at London Bridge.

Khan was on licence and wearing an electronic monitoring tag when he launched the attack, which injured three others, after he was invited to the prisoner rehabilitation conference on Friday afternoon.

The event was organised held by Learning Together, a programme associated with Cambridge University’s Institute of Criminology.

The attack has prompted the Ministry of Justice to review the licence conditions of every convicted terrorist released from prison, which Prime Minister Boris Johnson said was “probably about 74” people.

Justice Secretary Robert Buckland said any of the individuals concerned who was found to be in breach of their licence conditions would be recalled to prison.

“I will be meeting my officials this morning to satisfy myself about not only those cases, but also people who are about to be released and also a wider group who weren’t convicted of terrorism offences but who present an extremist risk in the prison system,” he told the BBC.

Mr Buckland said an order had already been issue preventing prisoners on early release attending events such as that where Khan carried out his attack.

Mr Johnson has vowed to take steps to ensure people are not released early when they commit serious offences.

But the family of Mr Merritt, from Cottenham, Cambridgeshire, asked for his death to not to be used to justify introducing “even more draconian sentences” on offenders in a heartfelt tribute released on Sunday.

They said: “He lit up our lives and the lives of his many friends and colleagues, and we will miss him terribly.

“Jack lived his principles; he believed in redemption and rehabilitation, not revenge, and he always took the side of the underdog.

“We know Jack would not want this terrible, isolated incident to be used as a pretext by the government for introducing even more draconian sentences on prisoners, or for detaining people in prison for longer than necessary.”

And in a tweet on Sunday evening, Mr Merritt’s father David said: “Don’t use my son’s death, and his and his colleague’s photos – to promote your vile propaganda.

“Jack stood against everything you stand for – hatred, division, ignorance.”

Miss Jones, a volunteer with Learning Together from Stratford-upon-Avon, Warwickshire, was described as having a “great passion” for providing support to victims of crime by her family.

In a statement, they said: “She was intent on living life to the full and had a wonderful thirst for knowledge, enabling her to be the best she could be.

“Saskia had a great passion for providing invaluable support to victims of criminal injustice, which led her to the point of recently applying for the police graduate recruitment programme, wishing to specialise in victim support.”

Khan, who was living in Stafford, was given permission to travel into the heart of London by police and the Probation Service. 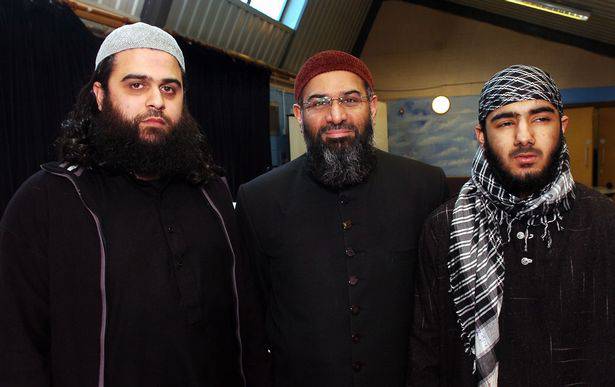 Convicted of terror offences in February 2012, he was released from prison on licence in December 2018, halfway through his 16-year prison sentence.

Armed with two knives and wearing a fake suicide vest, he was tackled by members of the public, including ex-offenders from the conference and men armed with a narwhal tusk and fire extinguisher, before he was shot dead by police at point-blank range.

One of the three people injured in the attack has been allowed to return home while the other two remain in a stable condition in hospital.

No-one else is being sought over the attack.

Two forensic tents and a trailer are still in place on the City of London side of London Bridge, with a police cordon running the length of the left-hand side of the bridge heading into the city.

A pile of floral tributes has been placed around the London Bridge Walk sign, including one reading: “I love you forever I am so proud of you.”

Another dedicated to victim Jack Merritt read: “Rest in peace Jack. You were a wonderful friend to us.”

Around London Bridge Underground station, several white boards had been placed with messages of support, including: “Together we stand. An attack on any one of us is an attack on us all.

“Haters are not welcome. We are London and we won’t fall.”

Previous London Bridge terrorist walked round school with Osama bin Laden picture in notebook
Next Usman Khan
Terror Leaks[+]
Terrorist Attacks [+]
Terrorism Financiers [+]
WordPress Image Carousel Plugin
Regardless how powerful or unstoppable you think you are, we will find you, we will expose you and we will STOP you
Last Updates From