Muslim Brotherhood Infrastructure in the UK

According to Dr. Samir Ghatas, the head of the Middle East Studies Center:
The societies established in the UK, Germany the U.S. and Panama, are used as a veil for other activities, which as a matter of fact are used by state intelligence services. They declare that they are charitable societies aiming to fund social activities via the collection of donations, but if truth are sometimes used in money laundering actions and illegal trading.

– Ghatas further claimed: The MB in the UK used the societies to purchase real estate and consumer goods companies for funding aims.

– According to al-Ittihad newspaper, MB officials head 13 societies and associations in London alone.

– These societies transfer money in and out, and invest money in various projects in the retail, finance, clothing and commercial sectors.

– The UK government ordered an investigation into the MB network within the UK. Some of the Cabinet Office report’s findings were partially published in October 2014. As part of the review, interested parties were asked to send short submissions on the subject.

– The committee, presided over by Sir John Jenkins, Britain’s ambassador to Saudi Arabia, aided by Dr. Lorenzo Vidinoan – an academic who has written a book about the Muslim Brotherhood in the West – and by the security services, has found “an incredibly complex web” of up to 60 organizations in Britain, including charities, think tanks and even television channels, with links to the Muslim Brotherhood, which will all now come under scrutiny.

– The Government crackdown is expected to include:
– Investigations into charities that are effectively “fronts” for the Brotherhood;
– Inquiries into funding of the organization and links to jihadi groups abroad;
– Banning clerics linked to the group from countries such as Qatar and Turkey from coming to Britain for rallies and conferences.

– Answering the UK government call for submissions on the MB in UK, the Quilliam Foundation a counter-extremism think tank, published on 28 August 2014 a report reviewing the MB affiliated bodies in the UK.

– The Brotherhood has a network of organizations in the UK which are very well established and were set up by members that moved to the UK from Arab countries. This network is used to disseminate pro-Brotherhood messages and create support in such a way as to make it seem as though the Brotherhood represents the interests of Muslims in general. The influence of this network on British Muslims is great and disproportionate, because most Brotherhood affiliated groups are run by well-educated and very active individuals who work among welfare organizations and study groups.

– On October 24, 2014, members of “Brotherhood Without Violence”, a dissident group of the MB, stated that the international organization of the MB is about to move its capital, worth some 165 billion dollars, from the UK to Turkey.

– This comes as a response to the British Government intentions to seize MB money in the country. The transfer was to take place within several days. ( http://goo.gl/vthqcw ) 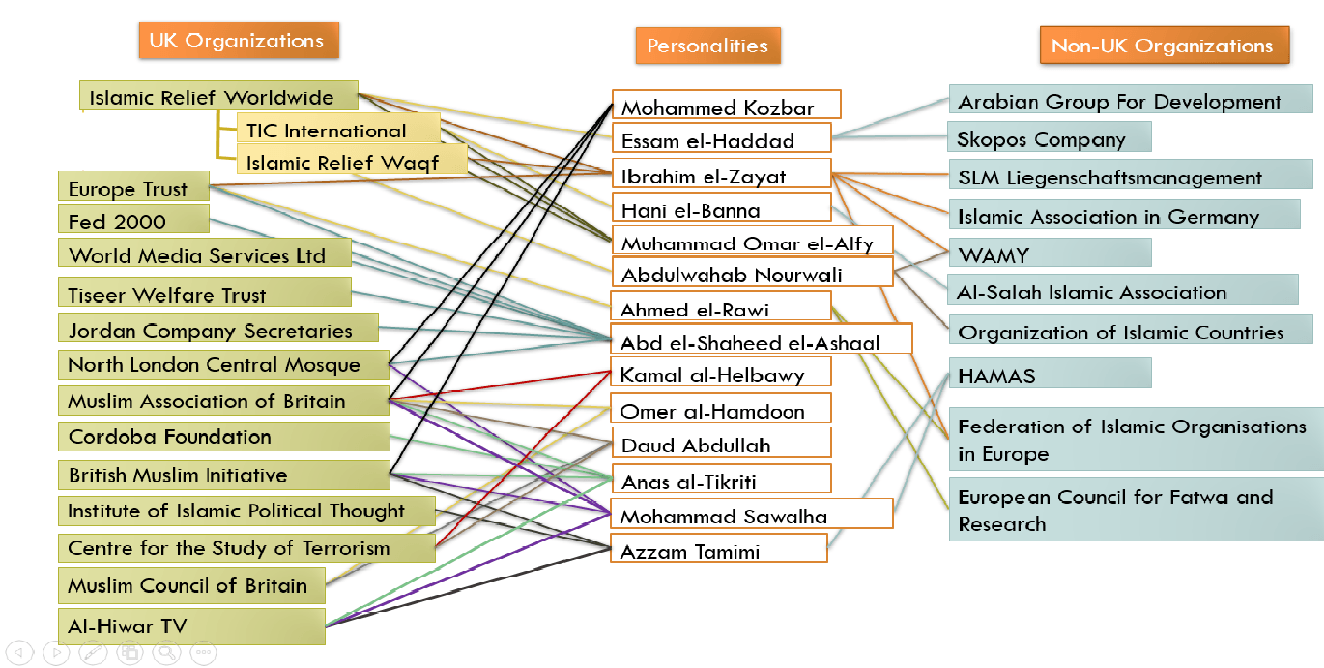