Image of St. Petersburg terror suspect indicates that this was an Islamic jihad attack

A man  has turned himself in to police and insists he is innocent and had no involvement in the attack.
The featured image is courtesy of Kyrgyzstan’s security service, who identified the bombing suspect as Akbarzhon Jalilov, born in the Kyrgyzstani city of Osh in 1995.

“Pictured: First images of ‘terror suspect’ accused of planting a nail bomb which ripped through carriages on St Petersburg metro killing at least ten and injuring 50 while Putin visited the city,” by Gareth Davies, Julian Robinson and Will Stewart, Mailonline, April 3, 2017:

These are the first images of the suspected terrorist accused of planting a nail bomb which ripped through carriages on a St Petersburg train killing at least ten and injuring 50 today.

Several Russian media outlets have released the CCTV picture of the bearded suspect who was wearing a long, black top and a hat blamed for caused the carnage by detonating a bomb that was packed with shrapnel.

The terrifying incident took place on a train that was travelling between Sennaya Ploshchad and Sadovaya metro stations.

Dozens have been injured, including at least three children, as it was reported the man left a briefcase on a train before moving carriages moments before the deadly blast.

A second explosive device disguised as a fire extinguisher was found and defused in a nearby station.

Bloodied passengers were left strewn across the platform in the Russian city as emergency services scrambled to save those wounded by the bomb and the resulting shards of glass and twisted metal.

Vladimir Putin is in his hometown of St Petersburg today for talks with the president of Belarus and confirmed ‘there are dead and injured’, offering his condolences to the families of those killed.

The Kremlin leader, who wanted to visit the scene in the aftermath of the attack but was held back by security services, said: ‘I have already spoken to the head of our special services, they are working to ascertain the cause of the blasts.’

“The causes are not clear, it’s too early. We will look at all possible causes, terrorism as well as common crime.”

Interfax news agency cited an unidentified source who says the suspect in Monday’s blast might have left the explosive device in a bag. 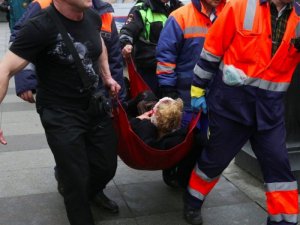 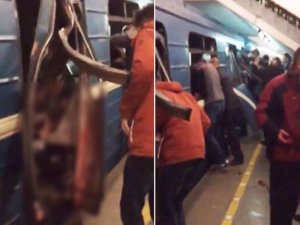 Previous ISIS used 17 suicide car bombs to help leader Abu Bakr al-Baghdadi flee Mosul
Next Chemical attack kills dozens of civilians in Syria
Terror Leaks[+]
Terrorist Attacks [+]
Terrorism Financiers [+]
WordPress Image Carousel Plugin
Regardless how powerful or unstoppable you think you are, we will find you, we will expose you and we will STOP you
Last Updates From