The website promotes its Telegram channel, which has 241 members. The website gets 879 visitors per day, or about 26,370 per month.

A video gallery on the website presents ISIS videos with Turkish subtitles. One such video features a speech by the late Abu Mus’ab Al-Zarqawi, former head of Al-Tawheed Wal-Jihad in Iraq, a precursor of ISIS. 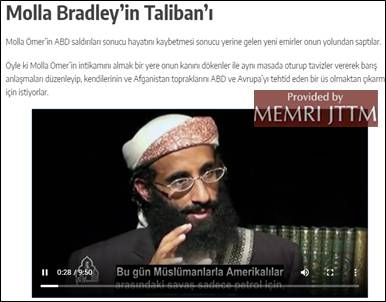 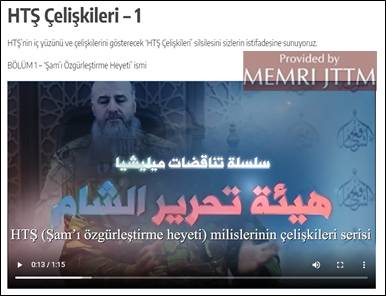 The website also publishes news of ISIS attacks. On March 11, it posted a report titled: “The Mass Mortar Attack By The Caliphate Soldiers On The Nigerian Army.” The report reads in part: “The attacks of the Caliphate soldiers in Nigeria, which is the stronghold of the Islamic State in Africa, targeting the apostate Nigerian army, are continuing with all their intensity.”

The website posts a daily “Islamic State War Bulletin” listing the attacks and reports of fighting from the Islamic state. The March 11, 2020 issue lists attacks and fighting in Syria, the Sinai Desert, and West Africa. 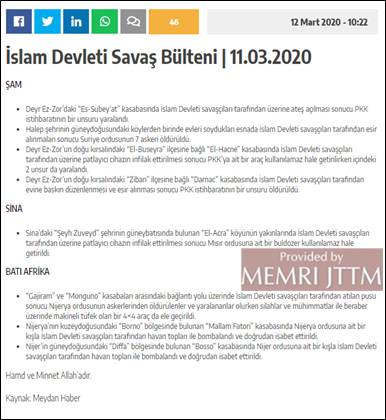 The “war bulletins” have been posted daily since June 2018. 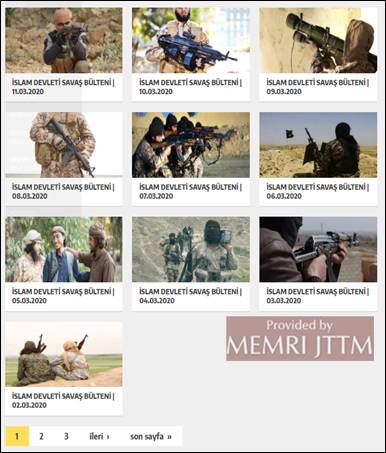 The website shares Turkish translations of official ISIS infographics released in ISIS’s Al-Naba’ weekly newspaper. The infographics give information on ISIS attacks, including the number and type of attacks, the number, rank, and nationality of people killed and captured, and the number of vehicles destroyed and seized. Other infographics described subjects such as the memorization of the Quran, the best way to recite the name of Allah, and “brotherhood for the sake of Allah.” 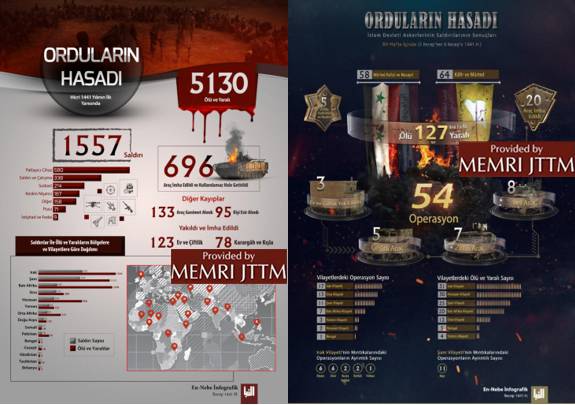 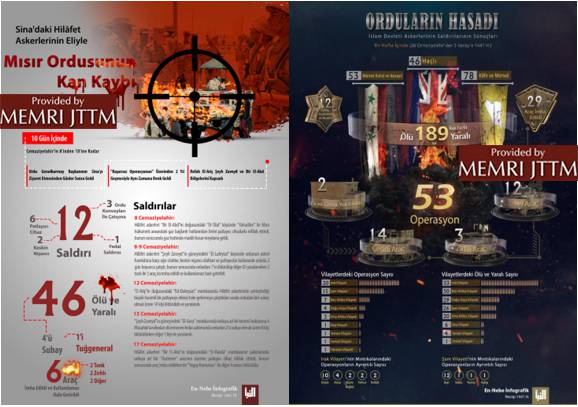 The website translates articles and interviews from ISIS publications such as its defunct monthly magazines Dabiq and Rumiyah, as well as Konstantiniyye, which was the group’s Turkish-language magazine. The website hosts a series of transcripts of broadcasts from ISIS’s internet radio Al-Bayan. The series is titled “Tales Of The Mobilization Of Islamic State Soldiers” and tells the stories of individual foreign fighters who traveled to join ISIS. 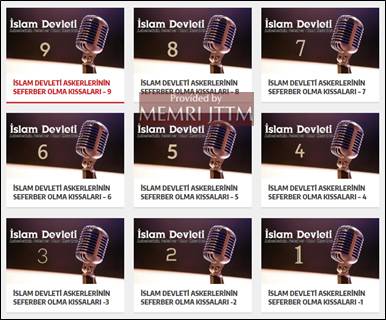 The website has a section titled “There Are Such Men From Among The Believers…” giving biographies of ISIS fighters as translated from ISIS publications Dabiq, Rumiyah¸ and Konstantiniyye. 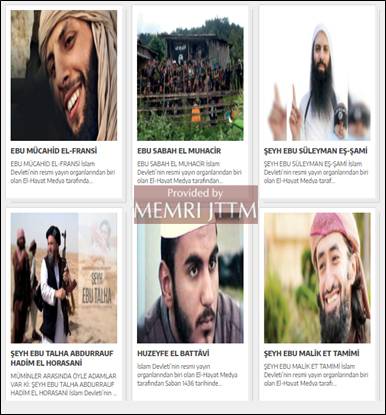 The website published a translation of an ISIS article titled “Kill The Idolaters Wherever You Find Them.” The translation gives the Muharram 1438 issue, corresponding with October 2016, of ISIS’s Rumiyah magazine, published by Al-Hayat Media, as the source of the article. 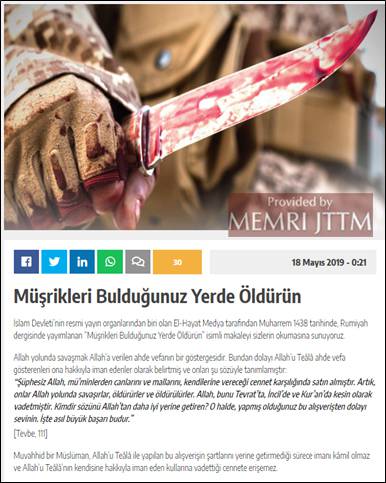 On March 2, 2020, the website published a Turkish translation of an article whose title was given as “And Allah Is The Best Of The Trap-Setters.” The translation gives the Shaban 1436 issue, corresponding with May-June 2015, of ISIS’s Dabiq magazine, published by Al-Hayat Media, as the source of the article. 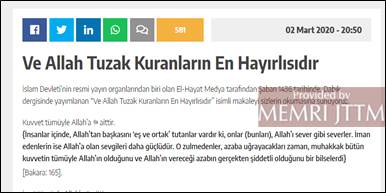 Another section of the website, titled “How Much Today Resembles Yesterday!” includes translations of texts from jihadi leaders including Osama bin Laden. 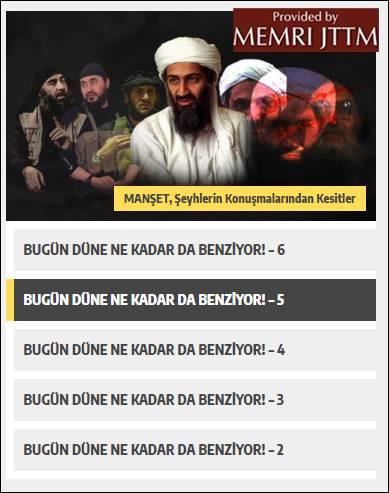 The website regularly posts news articles giving an ISIS interpretation of world events. One recent article is titled: “The U.S. Confessed: We Supported The Taliban Against The Islamic State.” The article reads in part: “By the kindness of almighty Allah, the true face of the Taliban continues to be revealed.” It describes how Gen. Kenneth McKenzie Jr., commander of U.S. Central Command, said that the U.S. had been giving limited support to the Taliban in order to fight ISIS. 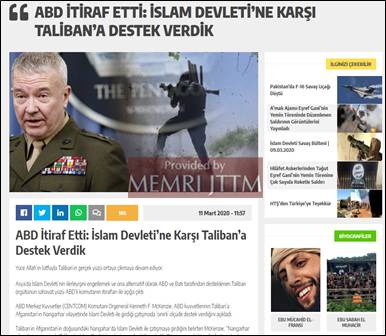 Another recent article on the website is titled: “The Results Of The Creed And Method That Al-Qaeda Put Forward On The Soil Of Syria.” The article describes how “the people of Idlib, who are being secularized by HTS and Al-Qaeda, continue to display their rejection [i.e., of Islam].”

On January 7, the website published an article titled “The Punishment For The Insult To The Messenger Of Allah” praising the two men who attacked the offices of the French satirical weekly Charlie Hebdo. January 7 was the fifth anniversary of the day two jihadis killed 12 people and injured 11 others at Charlie Hebdo, which had published satirical cartoons of Muhammad, before fleeing, reportedly saying: “We have avenged the Prophet Muhammad. We have killed Charlie Hebdo!” 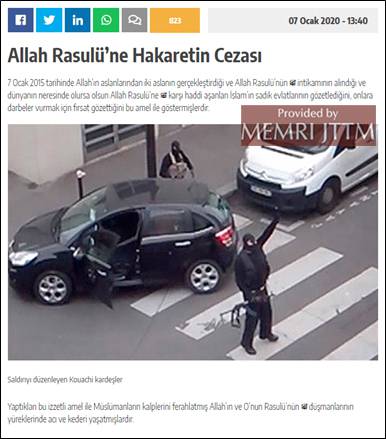 The website is hostile to the government of Turkish President Recep Tayyip Erdoğan. A March 10 news article reports on how Erdoğan “bragged” that Turkey is “the only NATO country that is fighting the Islamic State in close combat and is giving martyrs for this.” 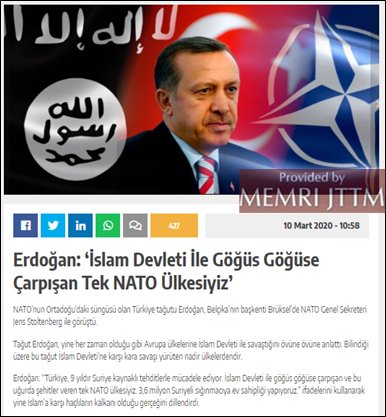 Another article refers to Erdoğan as the “tağut [tyrant] of the secular Turkish regime.” It refers to Turkish parliament as “the assembly of unbelief,” and says: “Our wish to almighty Allah is for this tyrant, who is sustaining a violent war against the Muslims and who brags at every opportunity of how he makes war against the Islamic State, to die as soon as possible from the corona virus or for some other reason.”

Ebu Musab Et-Turki’s columns have titles such as “The Shari’a That It Is Claimed Is Being Applied In Idlib And The Truth About It” and “Who Is A Mujahid And Who Can Be Called A Martyr?”

Ebu Ğureyb Eş-Şami’s columns have titles such as “Did The Islamic State Change Its Creed?” and “Oh Sons Of Islam, I am Speaking To You!”

Ebu Leys El-Anbari’s columns have titles such as “What Pushes The Crusader Countries And Their Apostate Friends To Fear The Children Of The Islamic State As Well?”

The website has an incomplete archive of Arabic-language PDFs of the ISIS weekly Al-Naba’ including issues dating back to June 2018. 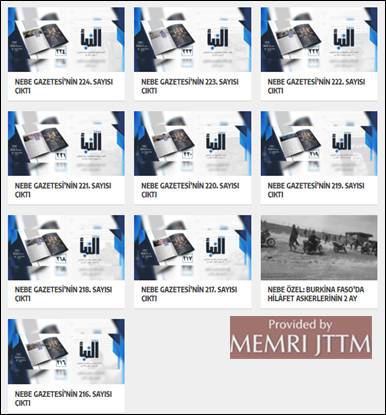 The website has posted 165 fatwas (“rulings”) from the broadcasts of ISIS’s internet radio Al-Bayan. The website also offers brochures with the logo of the Islamic State Office Of Assistance on various topics available for PDF download. 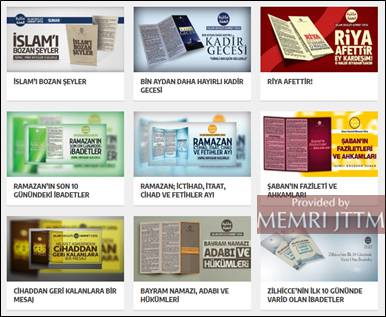 Previous Islamic State terrorist group claims the terrorist attack on Gurdwara in Kabul
Next Man claiming to be Al-Qaeda terrorist harassed young family in Blackburn
Terror Leaks[+]
Terrorist Attacks [+]
Terrorism Financiers [+]
WordPress Image Carousel Plugin
Regardless how powerful or unstoppable you think you are, we will find you, we will expose you and we will STOP you
Last Updates From