Umar Talib Zughayr al-Rawi and Abd al Rahman ‘Ali Husayn al-Ahmad al-Rawi, were selected to manage the financial affairs for ISIS’s so-called province, or Wilayah, of al-Furat after the death in a Coalition airstrike in 2017 of Fawaz Muhammad Jubayr al-Rawi, who was a Syrian terrorist financial facilitator who moved millions of dollars for ISIS’s attack and logistics networks. Umar, Abd al-Rahman, and Mushtaq Talib Zughayr al-Rawi were all business partners with Fawaz. An exploitation of financial records associated with Mushtaq revealed a history of direct money transfers to support ISIS provincial leaders through Al-Ard Al-Jadidah Money Exchange Company. 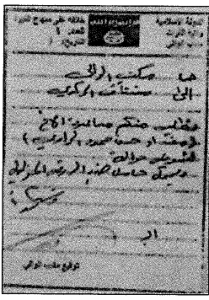 As of early October 2017, Umar owned several companies in Iraq, Syria, and Turkey and was in charge of performing transactions for ISIS in those countries. Umar’s main hawala was located in the vicinity of al-Qa’im, Anbar Province, Iraq.

As of late 2017, ISIS financial facilitator Abd-al-Rahman al-Rawi, and his business partner and cousin, Umar, had been selected to manage financial affairs for ISIS’s so-called Wilayah al-Furat following the death of Fawaz al-Rawi. Abd-al-Rahman and Umar had been partners in a currency exchange company in al-Qa’im, Anbar Province, Iraq with Fawaz al-Rawi. Both Abd-al-Rahman and Umar had formally accepted their appointments. Umar was responsible for money transfers inside Iraq. In addition to dealing with large sums of money arriving from abroad and distributing the funds to ISIS’s Iraqi and Syrian provinces, Umar and Abd-al-Rahman also distributed Iraqi retirees’ salaries from the GOI via an electronic payment system. Umar and Abd-al-Rahman also transferred funds to Iraq to purchase vehicles for ISIS fighters and exchanged cash for ISIS coinage.

As of early September 2017, Umar was an ISIS financial facilitation leader who received both money and gold from ISIS and transferred the money (or equivalent value of the gold) for ISIS. He transferred money throughout Iraq, and conducted transactions to and from Turkey.

He operated businesses in al-Qa’im, Ramadi, Hit, and Baghdad (Iraq), Albu Kamal (Syria), and Turkey. In al-Qa’im, Umar operated an exchange house, handling large amounts of money, and transferred money for ISIS. In Ramadi, Iraq, Umar was the co-owner of an exchange house that ISIS used to make a significant number of money transfers within Anbar Province, Iraq. Umar had other hawalah and money transfer offices used by ISIS members, which were operated in partnership with other Rawi Network members.