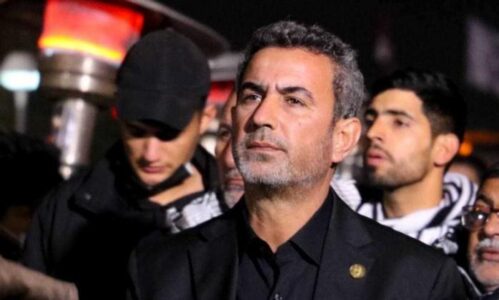 Status: Chief of Staff. served before as the secretary-general of Iran-backed Iraqi Shiite militia Kata’ib Hezbollah, one of the units of the PMF;

Roll: Fought in Syria and Iraq for many years, built the special units of the terror organization. Was close to Qassem Soleimani. The US finds him the person behind the attack on the American embassy in Baghdad in 2019;

Abu Fadak Al-Mohammedawi is the chief of staff of Iraq’s Shiite-led Popular Mobilization Forces (PMF), or Hashd al-Shaabi, an umbrella group for the Iran-backed Iraqi militias. Prior to his appointment, Mohammedawi served as the secretary-general of Iran-backed Iraqi Shiite militia Kata’ib Hezbollah (KH), one of the units of the PMF. The PMF has also grown into a powerful political force in Iraq as members of the umbrella group hold the most seats in Iraqi parliament.

Mohammedawi, whose real name is Abd al-Aziz Malluh Mirjirash al-Muhammadawi, entered the Iraqi paramilitary scene in the 1980s, when he served as an aide to Hadi Amri, the head of the Badr Organization. Mohammedawi was assigned intelligence tasks, and during this time, became close to Major General Qassem Soleimani, the former head of Iran’s Quds Force, who was later killed in a U.S. led airstrike on January 3, 2020.

It is suspected that Mohammedawi joined KH in 1997, and quickly became a part of its inner core in carrying out operations against Saddam Hussein’s government. Mohammedawi made a name for himself throughout KH due to his military capability and his ability to work well with other militias throughout the PMF. Additionally, it is suspected the Mohammedawi commanded the militia’s forces in the fight against ISIS in both Iraq and Syria.

According to Al Arabiya, Mohammadawi briefly left KH due to an issue regarding a ransom payout following KH’s kidnapping of Qatari hunters in 2015. However, following orders from Soleimani in October of 2019, Mohammadawi returned to KH, presumably under the role of secretary-general. There is speculation that Mohammedawi was linked to the December 2019 attack on the U.S. Embassy in Baghdad, as the phrase “the uncle passed through here,” was found on the embassy’s walls. Mohammedawi is often called “uncle” among his associates. Additionally, Iraqi activists consider Mohammedawi as being responsible for attacks against protesters on the Sinak Bridge and al-Khilani Square on December 7, 2019.

Following the death of KH’s commander and former PMF’s deputy chairman, Jamal Jaafar Ibrahimi a.k.a. Abu Mahdi al-Mohandes, by the same U.S.-led airstrike that killed Soleimani, PMF restructured the group’s leadership. The position of deputy chairman was replaced by chief of staff. After weeks of negotiations among PMF officials, on February 21, 2020, Mohammedawi was appointed as the new chief of staff. Mohammedawi was a close associate of Ibrahimi. He is a follower of vilayat-e faqih, or guardianship of the jurist, the Khomeinist doctrine that calls for a single religious cleric to lead the government. Additionally, sources claim that Mohammedawi “does not move without a fatwa.”

Private Financiers, Who is Who in the Zoo
Popular Mobilization Forces