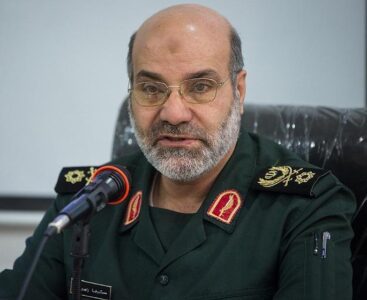 Status: Zahedi (sanctioned by the US) has been the commander of the Lebanon Corps since 2008. It is his second term as corps commander, the first term was between 1998-2002.
Between 2001-2008, Zahedi filled senior positions in the IRGC, including Commander of the IRGC Air Force, commander of the IRGC Ground Forces, and commander of the Thorallah command, responsible for security in Tehran. He was also deputy commander of Quds Force.
In his current position as commander of Quds Force’s Lebanon Corps, Zahedi plays a critical role in the military assistance Quds Force provides to Hezbollah in Lebanon, includes: maintaining close relations between Iran and Hezbollah at top level of command, visit Hezbollah units in the Beqaa as checking their preparedness, and participates in meetings of Hezbollah’s Shura council, which outlines the organization’s policy.
He is special advisor for the Syrian intelligence and strongly involved in the assistance Iran gives Assad’s regime.

Location: Iran and Lebanon and Syria.

Activities:
Mohammad Reza Zahedi is an Iranian senior military officer in the Islamic Revolutionary Guard Corps. He previously commanded its Air Force and Ground Force and currently serves as is one of the top commanders of the Quds Force;

Has acted as a liaison to Hezbollah and Syrian intelligence services. Reportedly guaranteed weapons shipments to Hezbollah;

Extremists, Who is Who in the Zoo
IRGC