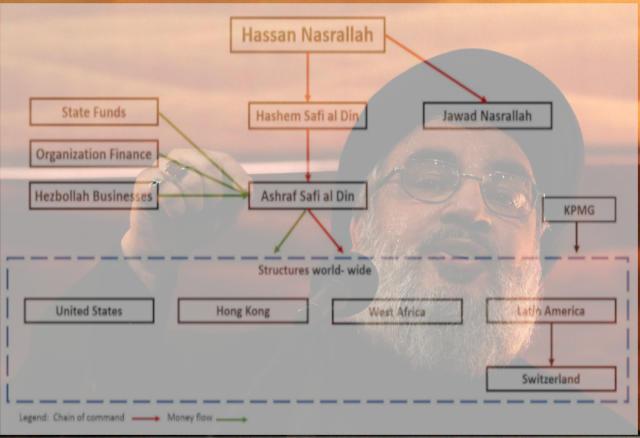 For years now Nasrallah has been preparing for a “doomsday” scenario according to which he will be forced to flee and vanish. According to Information received from various sources, the money set aside to pull off this disappearing act originates from a somewhat embarrassing fraud that involves diverting large amounts of money to accounts abroad, transferred to his close family. According to various estimation, Nasrallah managed to set aside funds in various accounts outside of Lebanon estimated at 1.6 billion USD.

The sources of the money diverted by this scheme are diversified. Some are funneled directly from Hezbollah’s budget or from the organization’s various financiers and businesses. Some from Iranian sources.

But, the most outrageous aspect of this scheme is that some of the funds are stolen directly from the Lebanese state. Yes, Nasrallah is taking money that belongs to the Lebanese people and pocketing it. The money is diverted by Hezbollah-affiliated politicians through committees in parliament that Hezbollah presides. After the funds are diverted from the committee’s, it is transferred outside of Lebanon rendering them almost impossible to track.

Naturally, this complicated scheme is carried out solely by those who are completely trusted by Hezbollah’s secretary general. Meaning those that are personally close to him such as family members or high-ranking figures in Hezbollah.

The who’s who involved in this scheme:

There are two prominent figures that are fully trusted by Nasrallah to execute this scheme. The first is Nasrallah’s cousin and his de-facto second in command, Hashem Safi al Din. Using his position as chairman of Hezbollah’s executive council and as a senior member at the Jihad council, Safi al Din is the one who gives the direct orders to Hezbollah’s parliament members to essentially steal money for Nasrallah’s “getaway fund” and transfer it to those responsible for making it disappear.

The second person is Nasrallah’s own son Jawad, considered to be his confidant, and some even consider him the future heir to the throne. When it comes to the fraud, Nasrallah treats Jawad as a full pledged partner, teaching him the “modus operandi” of this fraud system, so that in case something happens, Jawad will continue to manage it. Moreover, Jawad has a more positive perspective toward the West than his father, and he is well connected outside of Lebanon, allowing him to better operate the money transfer system. In addition, Jawad also acts as a counter balance to Safi al Din should the latter turn against him.

The third person worth mentioning is Achraf Safi al Din, a lawyer, a lawyer with offices in Beirut and California, that is experienced in building corporate structures for Hezbollah, mainly via offshore companies around the world that launder money for the organization. Interestingly enough, these corporate structures receive accounting services from the world-renowned accountancy firm, KPMG. According to our sources, both Achraf safi al-Din and Jawad Nasrallah are directly connected to senior managers at KPMG.
Currently, we know of four such corporate structures in four different continents, established by Achraf Safi al Din.

The first one is located in Latin America. The money is transferred via exchange houses in Brazil and Paraguay. The person in charge of this operation was Assad Ahmad Barakat. After the latter’s activity was exposed, other members of the Barakat clan took over. Once the money is transferred to the region, it is diverted by the Barakat clan’s middlemen and deposited in different bank accounts in Brazil and Paraguay. While some of the money is kept in Brazil, other sums of money are transferred again to different bank accounts in Switzerland managed by one of Hezbollah’s assets in Europe.

The second one is in West Africa. The hub is in Liberia under the supervision of Kassem Hejeij, a local magnate. The money makes its way there in several ways: the first, through a secret bank account in MEAB bank in Beirut that is under Hejeij’s name. From this bank account, Nasrallah’s “doomsday” funds are transferred to a bank account in the Ivory Coast where an operative makes a cash withdrawal and crosses the border to Liberia. The other way is transferring cash in flights of MEA (Middle East Airlines) to Abidjan in the Ivory coast and makes its way across the border to Liberia. In Liberia, half of the cash is stashed in a safe house and the other half is deposited in a local bank account.

The third corporate structure is in Hong Kong. At least four offshore real estate and import-export shell companies were established there. One of the companies that we know One of those is a company called “Unique Stars International Limited”, controlled by the Amhaz brothers, known Hezbollah financiers. The little we known about this particular route is that the money is funneled to these companies from Beirut with the help of KPMG’s accountants.

The fourth and last corporate structure is in the United States. Achraf Safi al Din has opened there in the past dozens of companies mainly dealing in real estate. For the purpose of this particular corporate structure, Safi al-Din, acquired two bankrupt American real estate companies. The money is transferred to these companies from Lebanon to another one of Achraf al-Din’s companies in the US called “Premiere Equities and Investment Group Inc” and from these companies the money makes its way in small amounts (less than 10,000$) to an account in Aruba under the Achraf’s name.

The global scheme that is described in this article tells the tale of Narallah’s private getaway insurance fund fortune outside Lebanon. A scheme that, as we speak is up and running and money continues to flow into Hezbollah’s secretary general’s private coffers.

Perhaps the most tragic aspect of this story it the continued exploitation of the Lebanese state by Hezbollah and the grave implications it has on the Lebanese people that suffer for years from Hezbollah’s choke hold over their lives.

Previous Repatriation of Islamic State terrorists in Western Balkans poses challenges for the justice system
Next Islamic State terrorist Abu Yusuf wanted to bomb Karol Bagh in Delhi
Terror Leaks[+]
Terrorist Attacks [+]
Terrorism Financiers [+]
WordPress Image Carousel Plugin
Regardless how powerful or unstoppable you think you are, we will find you, we will expose you and we will STOP you
Last Updates From