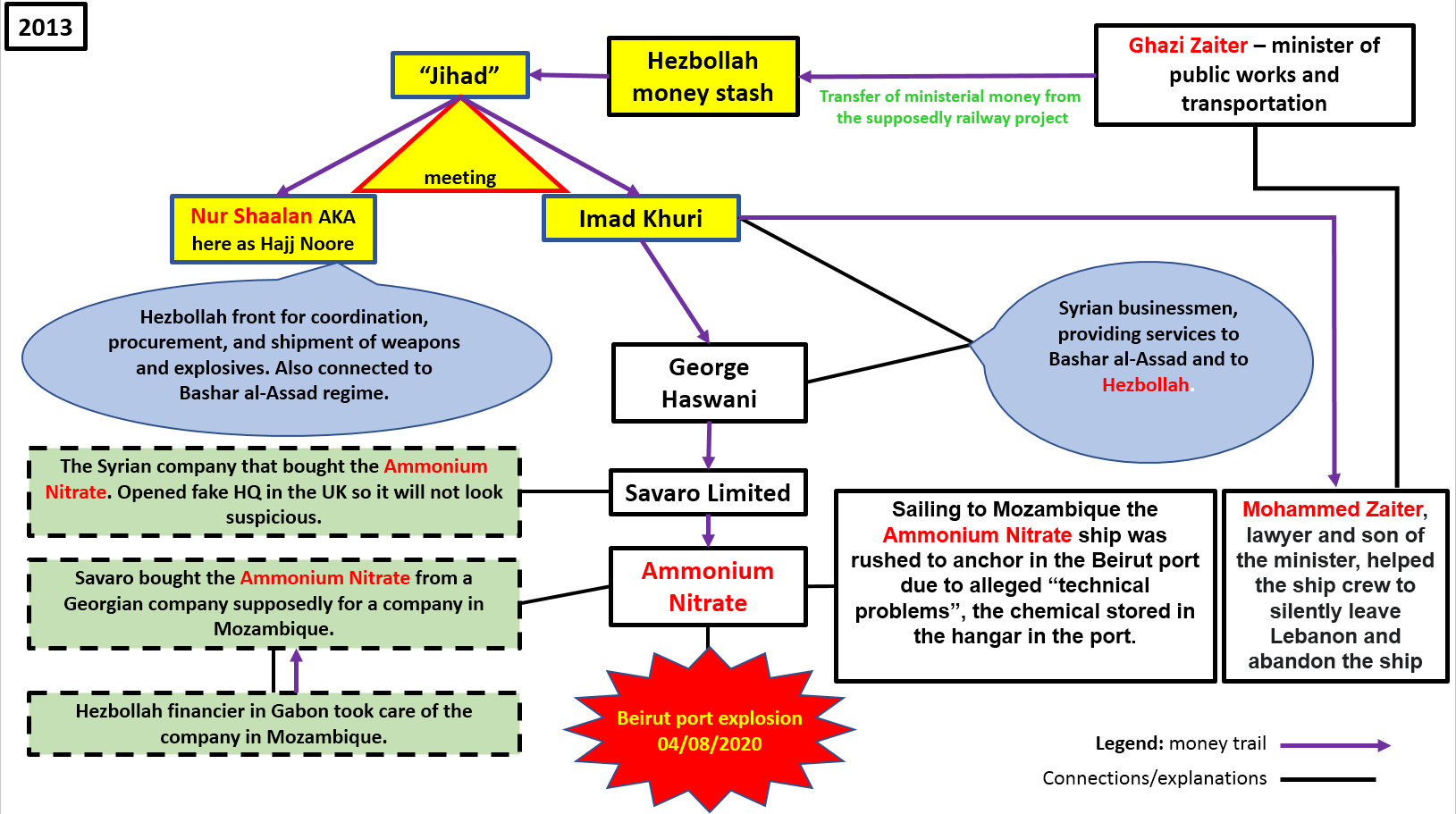 Inspecting to the core the testimony that was given to us by “Jihad”, and cross-referencing his unique information with other articles published about the explosion, like the Aljazeera research, and analyzing information we got from sources in Africa, leads us to the following grand picture:

Hajj Noore – is Nur Shaalan, Hezbollah front person for coordination, procurement and shipment of weapons and explosives. The fact he was on that triangle meeting, signifies the importance of the event. He is a shadowy senior figure in the organization.

Ghazi Zaiter, Mohammed Zaiter, and the railway project – the railway project is stuck for many years. It is, for many years now, the easiest money to be taken out through Hezbollah’s construction companies. There is no doubt that the money from that origin is still aiding Hezbollah today (we are talking about millions of USD). As we understand it Zaiter senior skimmed some of the money and then also arranged a nice income for Zaiter junior.

These Syrians businessmen used their business connections to Savaro limited company and some straw companies to make this operation possible and avoid sanctions. Thus, it was Savaro limited that bought the ammonium nitrate from the Georgian company, Rustavi Azot.

Mozambique – Fabrica de Explosivos de Moçambique is the local company that was supposed to be the destination of the ammonium nitrate when it left Georgia. The company is not responding and not found anywhere, and has probably shut down its activity. We reveal here that cross reference info from various sources indicates that the person who made this deceit possible, is Hezbollah financier Kassem Hejeij.

Kassem Hejeij – A Hezbollah designated financier, who has numerous connections in the African continent.[1][2] He used one of them to approach this company and offer them 700,000 USD to be the official destination of the ammonium nitrate, and after that to close the company. The company took the deal almost immediately due to the fact it was in financial difficulties. The mediators to this deal were two Lebanese that are dominant figures in the Lebanese community in Mozambique, and Hezbollah members. In recent years we see an increase in Hezbollah’s activity in Mozambique.

Few years later, probably due to the issue at hand, Hejeij, who divided his life between the Middle East and Africa, came back to Lebanon and became the mayor of Deir Antar, willing to run for the parliament and take immunity, avoiding his involvement in the Beirut port explosion.

Previous Sultan Aziz Azam
Next Lebanese authorities thwarted Islamic State bomb plot targeting Hezbollah bastion
Terror Leaks[+]
Terrorist Attacks [+]
Terrorism Financiers [+]
WordPress Image Carousel Plugin
Regardless how powerful or unstoppable you think you are, we will find you, we will expose you and we will STOP you
Last Updates From